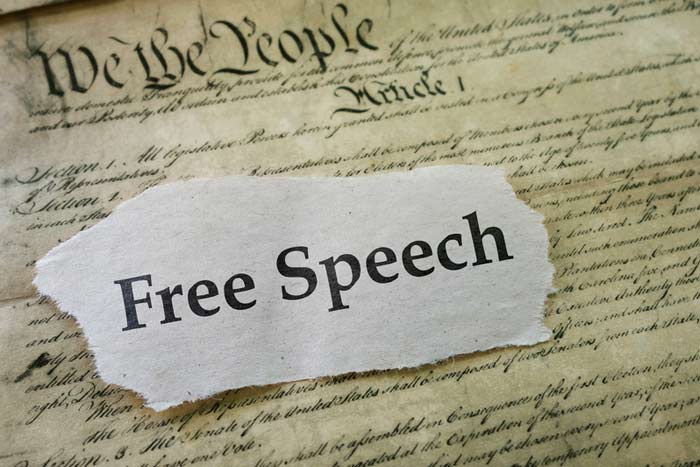 The Inconvenient Truth About The First Amendment: It Protects Crude And Offensive Messages

Them’s Fighting Words. Or, are they?

The Inconvenient Truth About The First Amendment

Barboza, clearly incensed, returned the speeding ticket payment form to the town’s court clerks, adorned with the message of “F*ck Your Sh*tty Town Bitches.” Barboza also crossed out the town name “Liberty,” replacing it with “Tyranny.” Barboza’s anger was apparently not enough to prevent him from also enclosing payment of the $175 fine. 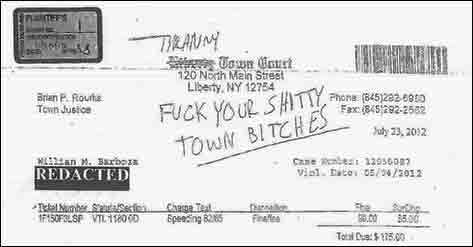 The clerks were alarmed!

The court clerk who delivered Barboza’s missive to the town judge indicated that she and the other clerks were upset and alarmed by Barbosa’s threatening language. (Barboza could have ostensibly prevented this reaction by placing a comma after the word “town”, which may have altered the reading of his phrase).

Barboza was charged with aggravated harassment as a result of his actions and arrested. Barboza subsequently filed suit against Liberty and the town’s prosecutor for violating his First Amendment rights. The charges were later dismissed.

In September 2015, Hon. Cathy Seibel, a federal judge in the Southern District of New York, ruled that Barboza’s free speech rights had been violated, and allowed his lawsuit to proceed.

In her order, Justice Seibel stated that in order to be criminalized, threatening speech must rise to the level of so-called “fighting words”. The definition is:

“Personally abusive epithets which, when addressed to the ordinary citizen, are as a matter of common knowledge inherently likely to provoke a violent reaction.”
Williams v. Town of Greenburgh, 535 F. 3d 71, 77 (Court of Appeals, 2nd Circuit, 2008).

Even though the Liberty Court clerks felt threatened by Barboza’s language, since a reasonable individual would not have felt truly endangered, Barboza’s speech was protected under the First Amendment.

The truth of the First Amendment was upheld by Justice Seibel. She found that Barboza’s words were

“not inherently likely to provoke a violent reaction…not directed at anyone in particular, and could not be interpreted as threatening any particular action.” Cohen v. California, 403 U.S. 15 (1971).

Essentially, free speech is judged on an objective basis. An individual, no matter how sensitive, cannot inhibit the free speech rights of others.

When there is liability:

But I Barely Touched You!

Contrast that concept with what is commonly knowns as the “eggshell skull doctrine”. This rule imposes complete liability on a defendant who negligently injures someone. According to this doctrine, you

Therefore, if an individual drunkenly (or in a state of complete sobriety) punches someone who, unbeknownst to her, is a hemophiliac, and unexpectedly causes severe blood loss and hospitalization, the attacker would be liable for the victim’s hospital bills.

This remains true even if the same punch delivered to a healthy individual would have only resulted in a bloody nose. You don’t get to choose your victims.

Essentially, negligence is judged on a subjective basis. An overly fragile individual can increase the exposure and accountability of others.

The lesson from the contrasting applications of free speech and negligence? Ignore the advice of Teddy Roosevelt.