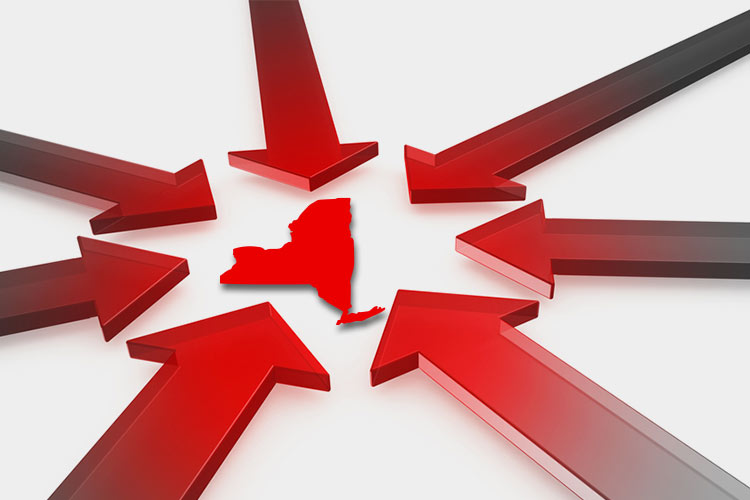 Cannabis News February 2020: NY is the Center of Gravity

1. In Cannabis News February 2020, New York is in a leadership position

New York remains very much the center of gravity for cannabis momentum in 2020. New York is strategically surrounded by other states which are tentatively and gingerly waiting on the sidelines for strong leadership.

With one eye focused on a stream of new and rich tax revenue, Governor Andrew Cuomo (D) introduced his adult/recreational use package to the NY legislature in late January. There are lots of published summaries of the Governor’s proposal, but we think that one of the best comes from the law firm of Wilson Elser here.

Deep differences left over from the last NY legislative session apparently remain. These differences are mostly concerned with how to spend the anticipated cannabis tax windfall.

Some want to apply this revenue to benefit communities of color and to compensate those communities for deep social harms inflicted from the failed war on drugs.  Some want this money to flow to law enforcement to protect against impaired driving, or drug education, or drug rehabilitation, etc.

And Governor Cuomo is reportedly resisting all attempts to divert this revenue from any purpose other than to help fill the state’s desperate $6 billion budget gap.

It’s early in the process yet and discussions are mostly hidden from public view. But the hope is that disagreements will be bridged and a law enacted with the passage of the New York State budget by April 2020.

But do not forget: Whither New York goest (adoption or rejection), other states, and maybe even the Feds, will follow.

2. Cannabis News from the states

Are you ready for a quick round-up from several other states? Here goes:

a.  In New Mexico, a key state senate committee rejected adult/recreational sale. That likely ends efforts for the year in that state.
See the ABC news item here

b. On February 18th, a coalition of Connecticut clergy rallied in the state’s Capitol in favor of adult/regulation use.  The clergy asserted that:

Prohibition does not work. Legalization will regulate the market and bring sorely needed revenue to the state budget….”

Massachusetts, even in the face of an excruciatingly slow roll-out of dispensaries, announced annual sales of $420mm. Projections on these sales are that Commonwealth tax revenues will exceed $71mm. See the article here

d. The New Hampshire House of Representatives passed a veto-proof measure for adult/recreational use, without a public sale and tax regimen. That means only use would be legalized. The veto-proof majority is important because Governor Chris Sununu (R) promised a veto. Democrats also control the New Hampshire state senate, and may only be two (2) senate votes shy of a veto over-ride on cannabis reform. See the article here

e. As of February 18, cannabis initiatives are on the November 2020 ballot in New Jersey, South Dakota and Minnesota, with efforts underway to place ballot initiatives in Arizona and Montana. See the Marijuana Policy Project here

f.  In New Jersey, an appeals court ruled that an employer must reimburse an employee for the cost of medical marijuana (at about $616/month) resulting from an on-the-job injury. The ruling has huge ramifications for worker’s compensation and private health insurance companies which now generally reject coverage for cannabis prescriptions because of the Controlled Substances Act, Schedule 1 status of the medicines.  See the Philadelphia Inquirer article here

3. Is the cannabis bloodbath ending?

2019 was a brutal year. Plummeting cannabis stock valuations were followed by the departure of prominent, and even visionary, cannabis CEOs.  Wildly speculative practices, coupled with the failure of cannabis legalization to progress, left some cannabis companies mere months away from running out of cash. Large Canadian companies have a median of only 6.5 months of cash on hand. See the Financial Post article here

But are things turning around?

Some seem to think so and point to Canopy Growth, the largest cannabis company in the world, as Exhibit A.

After putting $3.7 billion into Canopy Growth for its 37% interest, Constellation Brands could no longer sit on the sidelines as undisciplined management (from their POV!) caused the stock to drop 60% from 2019 highs. So, it was out with the old and in with the new, as Constellation Brands installed its own team of seasoned consumer brands professionals.

The news was good enough to induce a general cannabis market rally.

Despite industry turmoil and lay-offs by major players such as Tilray and Aurora, job opportunities continue to expand.  Leafly, an industry job source, reported that adult/recreational use in Massachusetts has led to 10,226 new jobs in a state which only started legal sales in November 2018. Illinois now has twice as many cannabis jobs as meatpacker jobs. Oklahoma saw 221% job growth in medical cannabis which now supports 9,412 jobs in that state. See the Green Market Report here

Are you listening, New York?

1. A Chicago Girl Scouts Troup sold out of 230 boxes of their famous cookies in four (4) hours outside Chicago’s Dispensary33. The dispensary wants the Troup back. This story echoes a similar report of an enterprising 9-year-old Girl Scout who, a year ago, quickly sold 300 cookie boxes outside a San Diego dispensary. There are “munchies” jokes to be made here.

2.  Strict advertising restrictions in Colorado have been sidestepped by no less than 51 licensed operators who sponsored various Adopt-A Highway participations, and received the freeway signage benefits that the program provides.

3.  CELEBRITY TAKES:  Carlos Santana is another major musician to announce a partnership to develop cannabis and hemp brands with Left Coast Ventures. Candace Gingrich, a long time LGBTQ advocate (and half-sibling to former House Speaker Newt Gingrich) agreed to speak about social equity at the Benzinga Cannabis Capital Conference in Miami on 2/24.

That’s it in cannabis news for February 2020!

Love to hear back from you at doug@wassruss.com if you have any comments, revisions, or more color to add.