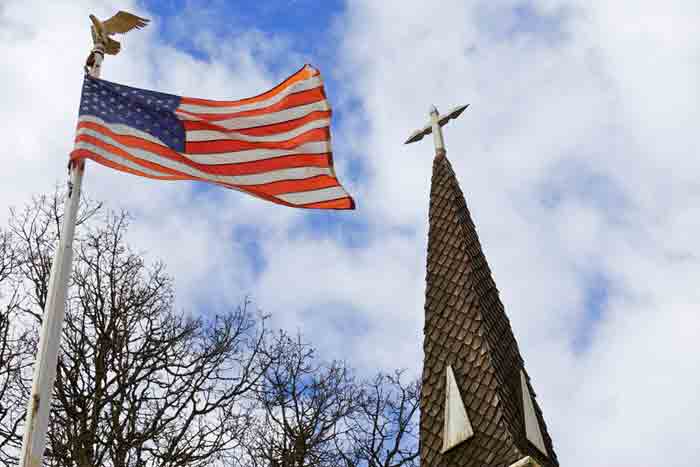 Separation of Church and State in a Nutshell

I.  The Law: Separation of Church and State in a Nutshell

The First Amendment of the Constitution states: “Congress shall make no law respecting an establishment of religion [known as the “Establishment Clause”] or prohibiting the free exercise thereof [known as the “Free Exercise Clause”]…”

Together, these clauses form the textual basis for the Supreme Court’s interpretation of the “separation of Church and State” doctrine. Essentially: (i) citizens are free to embrace or reject a faith; (ii) any support for religion must be voluntary; and (iii) all religions are equal in the eyes of the law. 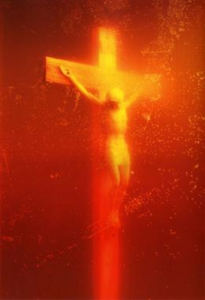 Many people may remember the infamous Piss Christ, a 1987 photograph by American artist Andres Serrano which depicted a small plastic crucifix submerged in a glass of the artist’s urine[1]. Of note, Serrano received a $15,000 grant for his work from the National Endowment for the Arts (“NEA”). The NEA is an agency of the United States federal government that offers funding for projects exhibiting “artistic excellence”[2]. The purpose for which the NEA was established was “to support the survival of the best of all forms that reflect the American heritage in its full range of cultural and ethnic diversity and to provide national leadership on behalf of the arts.”

Piss Christ was, without a doubt, a provocative statement.

Serrano’s work received a favorable reception from the art world, while Serrano himself received death threats and hate mail from the non-art world. Serrano insisted his allegedly “blasphemous” work was not intended to denounce religion, and instead alluded to a perceived commercializing of Christian icons in contemporary culture.  While many were skeptical about this characterization of Serrano’s work, Serrano’s supporters argued that artists often use novel and sometimes controversial ideas to challenge convention and put traditions and behavior under society’s “microscope”.

The argument about the artistic merits of Piss Christ[3] centered around whether the piece was a thought-provoking, insightful work or a trashy and disrespectful spectacle.

Conservatives opposed to government funding of Piss Christ argued that the artwork was “offensive to Judeo-Christian values” and the government’s funding of the same would be akin to not treating Christianity as equal to other religions, a violation of the doctrine of separation of Church and State[4]. Liberals claimed that the work was harmless, and stifling funding to “controversial” works of art would both violate free speech protections and have a chilling effect on the production of provocative artwork intended to stimulate thought, analysis and discussion of current religious, social, and political systems.

Nonetheless, as a result of pressure from conservative groups, including the American Family Association, who criticized the agency for using tax dollars to fund highly controversial artists (including Serrano), Congress cut NEA funding to $99.5 million in 1996.

Moreover, in response to the pressure resulting from NEA grants to fund projects such as Serrano’s, Congress created an Independent Commission of Constitutional Law Scholars to review the NEA’s grant-making process and make recommendations. Ultimately, Congress adopted the “Williams/Coleman Amendment”[5]. The Williams/Coleman Amendment directed the NEA to judge the artistic merit of grant applications while also “tak[ing] into consideration general standards of decency and respect for the diverse beliefs and values of the American public”[6].

Ark Encounter, by Ken Ham, is a full-size replica of the famed Biblical vessel, which opened in Kentucky in July, 2016. The ark measures 510 feet long, 85 feet wide, and 51 feet high, based on the actual dimensions found in the book of Genesis. According to its website, the $91 million project feature animatronics animals, including dinosaurs, which Ham believes coexisted with humans. Ark Encounter is an extension of Ham’s Creation Museum, which opened in 2007. 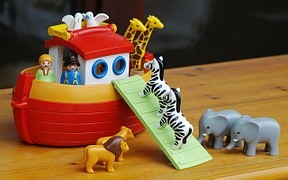 The project had been approved to receive $18 million in tax rebates in 2014 by the State of Kentucky.

Through the Kentucky Tourism Development Act[7], Kentucky provides an incentive program for qualifying tourism attractions “in order to advance the public purposes of relieving unemployment by preserving and creating jobs … and by preserving and creating sources of tax revenues for the support of public services.” The incentive allows an approved project to recover the lesser of either its total amount of sales tax liability or up to twenty-five percent (25%) of its approved development costs over a ten (10) year period. A wide variety of projects have qualified for these incentives, including numerous bourbon visitor centers – which some might argue are akin to a “religious experience”.

However, it became widely reported that employees who helped build Ark Encounter were required to sign a statement of faith that rejects homosexuality, same-sex marriage, and premarital sex, and affirm their belief in the book of Genesis and in Jesus.

Consequently, and after further investigation, the State of Kentucky Tourism Cabinet withdrew its tax rebate proposal, claiming that the Ark Encounter’s true intention was to become a Christian ministry outreach rather than a tourist attraction. Therefore, the Cabinet argued, a tax rebate would be contrary to the Establishment Clause of the First Amendment.

Ark Encounter sued Kentucky Tourism Cabinet members in Federal Court in the Eastern District of Kentucky (Civ. No: 15-13), claiming that it met the neutral criteria for tax incentives offered by the State, and for Kentucky to withhold tax incentives would violate the Establishment Clause.

In January of 2016, the Court issued a 71-page decision containing a detailed and thorough analysis of the doctrine of the separation of Church and State, and enjoining the State of Kentucky from withholding the tax incentive from Ark Encounter.

The Court essentially found that everything else being equal (i.e. if Ark Encounter met all the requirements of the Kentucky Tourism Development Act’s incentive program, which it did), favorable treatment for secular groups over religious groups (e.g. a denial of a tax rebate to Ark Encounter simply because of its religious nature) would violate the Establishment Clause of the Constitution.

The same argument that the Court made on behalf of allowing government funding of Ark Encounter could be applied to the NEA’s funding of Piss Christ. If the NEA believed that Piss Christ was a work of “artistic excellence”, it would be violating the Establishment Clause by withholding a grant solely because of the secular or religious nature of Serrano’s work.

In his dissent in the case of Wallace v. Jaffree, 472 U.S. 38 (1985) (a case which dealt with the issue of silent school prayer), Justice William Rehnquist, while providing a thoroughly historical-based analysis of the doctrine of the separation of Church and State,  insisted that the Establishment Clause was simply meant to promulgate open-minded toleration, not hostility towards religion. This notion lends itself to the permissibility of governmental funding for both Ark Encounter and Piss Christ[8].

Though each case requires its own analysis, it appears on a basic level that the government’s mere endowment or funding of religious or seemingly anti-religious works of art alone is not sufficient to invoke the doctrine of Separation of Church and State.

In fact, it is the governmental withholding of funding based on religious reasons alone that would violate the Establishment Clause.

[1] The complete title of the work is Immersion (Piss Christ).

[3] I had planned on referring to Piss Christ with the breezier abbreviation of “PC” for the duration of this article, but decided the acronym was unfitting. Piss Christ is many things, but politically correct is not one of them.

[4] Then Senator Alfonse D’Amato famously ripped up the catalog containing Piss Christ on the Senate floor in 1989.

[6]  Interestingly enough, the Williams/Coleman Amendment and its vague, subjective language triggered more lawsuits and constitutionality arguments than the actual funding of Piss Christ by the NEA. See, e.g. National Endowment for the Arts v. Finley, 524 U.S. 569 (1998).

[8] While one could readily argue that Piss Christ itself is hostile towards Christianity, it is hard to posit that the work’s funding by the government indicates a governmental hostility toward the religion.