We’ve mentioned this before but cultural heritage recovery is a cutting edge issue in the world of fine art.

Now, the New York Times, in the October 1, 2012 edition with a front page article and an above the fold location, has highlighted the aggressive tactics taken by Turkey to lay claim to items of Ottoman heritage, many times against the foremost museums in the world.

Turkish officials this summer filed a criminal complaint in the Turkish court system seeking an investigation into what they say was the illegal excavation of 18 objets d’art that are now in the Metropolitan Museum of Art’s Norbert Schimmel collection.

Last year, Turkey’s director-general of cultural heritage and museums, Murat Suslu, presented Met officials with a stunning ultimatum: prove the provenance of ancient figurines and golden bowls in the collection. The criminal complaint appears to be the follow-up.

Thievery and looting are wrong, Turkey says, no matter when they occurred. “Artifacts, just like people, animals or plants, have souls and historical memories,” said Turkey’s culture minister, Ertugrul Gunay. “When they are repatriated to their countries, the balance of nature will be restored.”

The argument is reminiscent of claims made by sympathetic victims of Nazi-era looted art.  In fact, we submit that the field of Holocaust recovery art may have softened the environment and weakened opposition to claims for cultural heritage recovery.

Turkey’s repatriation drive alters accepted practices, like a widely embraced Unesco convention which allows museums to acquire objects that were outside their countries of origin before 1970.  Although Turkey ratified this convention, it is now citing a 1906 Ottoman-era law — one that banned the export of artifacts — to claim as its own any object removed from Turkey after 1906.

The Met has countered that that many antiquities such as these have traveled internationally throughout the centuries.  Asking for documents of title and provenance at this point in time may be unreasonable.  Further, Turkey’s claims may be a double edged sword.  Turkish museums are themselves full of looted national treasures acquired by the Ottomans during the centuries they ruled parts of the Middle East and southeast Europe. 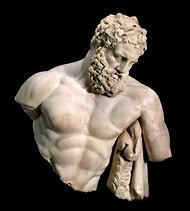 The top half of the “Weary Herakles” statue recently returned to Turkey by the Museum of Fine Arts, Boston