GOOD THINGS MAY NOT COME IN SMALL PACKAGES 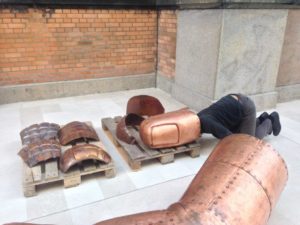 We pity the starving artist when a business speculator commandeers the artist‘s work for selfish personal gain. Bad, bad businessman!

But when an artist focuses on creating his master works, he also needs to pay attention to mundane matters – such as honoring his business promises to others.

So, we start our story of Bert Kreuk and Danh Vo.

Danh Vo fled from Vietnam when he was 4 years old. He and his family were rescued at sea by a Danish ship, and Denmark has been rewarded many times over for its warmth and hospitality (Take heed, Donald Trump! Take heed!) Mr. Vo is now 39 years old and has matured into a renown Danish artist with an “early blue chip” pedigree. That means speculators buy his works at low prices to sell quickly for huge gains. Total sales of his works were only $33,700 in 2012, but that total has now soared to multiple millions each year.

A lot of Mr. Vo’s works consist of stunning, exhibition room-size pieces. Freedom, immigration and belonging are central themes. See the photo captioned above for a typical example.

Bert Kruek is a wealthy contemporary art collector who claims to have hired Mr. Vo to create the type of dazzling, large scale installation for which Mr. Vo is well known. The work was intended for a June, 2013 exhibition at the Gemeentemuseum at The Hague. Mr. Kruek was to buy the commissioned installation, and have it as his own after the show. But there was no written agreement. The commission was based on a verbal agreement substantiated, in part, by e-mail exchanges. So, there was opportunity for ambiguity and misunderstanding.

No large scale work was ever delivered by Mr. Vo. Instead, a few days prior to the exhibition a package was delivered containing one (1) gilded beer case-sized Budweiser container box. Ouch!

According to Mr. Kruek, between the time he hired Mr. Vo to create the large scale work, and the start of the exhibition, the world discovered Mr. Vo. Prices of his works skyrocketed and Mr. Vo is alleged to have turned his attention towards far more profitable or high profile ventures.

Mr. Vo, for his part, asserts that fine art is conceived through a process of inspiration. Artistic insight is not like stock material produced on a factory assembly line. Mr. Vo told the New York Times:

“If [speculators such as Mr. Kruek] only look at my work as a commodity, then that is something I am not interested in….. I don’t think I can work like this. I don’t think anything can come out of me because there is such a deep resistance. It goes against everything I believe as an artist.” *

But was there a deal to produce an expected type of work? Round one went to Mr. Kruek this past June (2015) when a Danish judge in Rotterdam, after sifting through the sparse evidence, ordered Mr. Vo to complete the commissioned work within one (1) year or face a daily fine of about $11,000. Mr. Vo has promised an appeal.

It’s a fascinating case, and will have increasing relevance as world-wide financial speculation feverishly chases after the Next Big Artist. It’s the old story of creative freedom for the little known artist vs. the business desires of the sponsor.

What constraints apply to an artist when he accepts a commission? Who controls the look and feel of the piece? What artistic freedoms are subverted by the process? Does the investor retain a say in the production of the work? What are the delivery timelines? And so on.

Of course, all of these issues should be addressed in writing.

There will be more to come on this case. But an artist needs to recognize that an art commission, if freely accepted, is a business arrangement which needs to be honored like any other business relationship; even if creative sensibilities may be offended. Artistic freedom should be protected, for sure, but so should the right to create and rely on a binding agreement.